January 16, 2020
An old friend told me about a conversation he had with his daughter over breakfast, where they mused about which cereal has the most sugar.  That led him to create a simple diagram comparing about a dozen different cereals against their sugar content.  While I was reviewing his graph, I noticed it had a few major design limitations.  The most glaring was that he used the serving sizes listed on the cereal boxes.  I decided to make my own comparison graph, using weight and percentages by weight instead of measurements by volume.  This led to many more comparisons, and was part of the inspiration for my recent book.  The first graph below is the result for different cereals, sorted in order of most to least amount of sugar.

As I was looking at this graph, I thought about how sugar and carbohydrates are basically the same thing.  (A carbohydrate is just a bunch of sugars chained together.  The body breaks these down into their component sugars and moves on from there.  There's more of a discussion of this in my book, or you can look it up in any organic chemistry textbook, whichever is easier for you.)  So I decided to sort by total carbohydrates as well (excluding dietary fiber, for reasons I explain in my book - is this a shameless plug yet?  sorry). 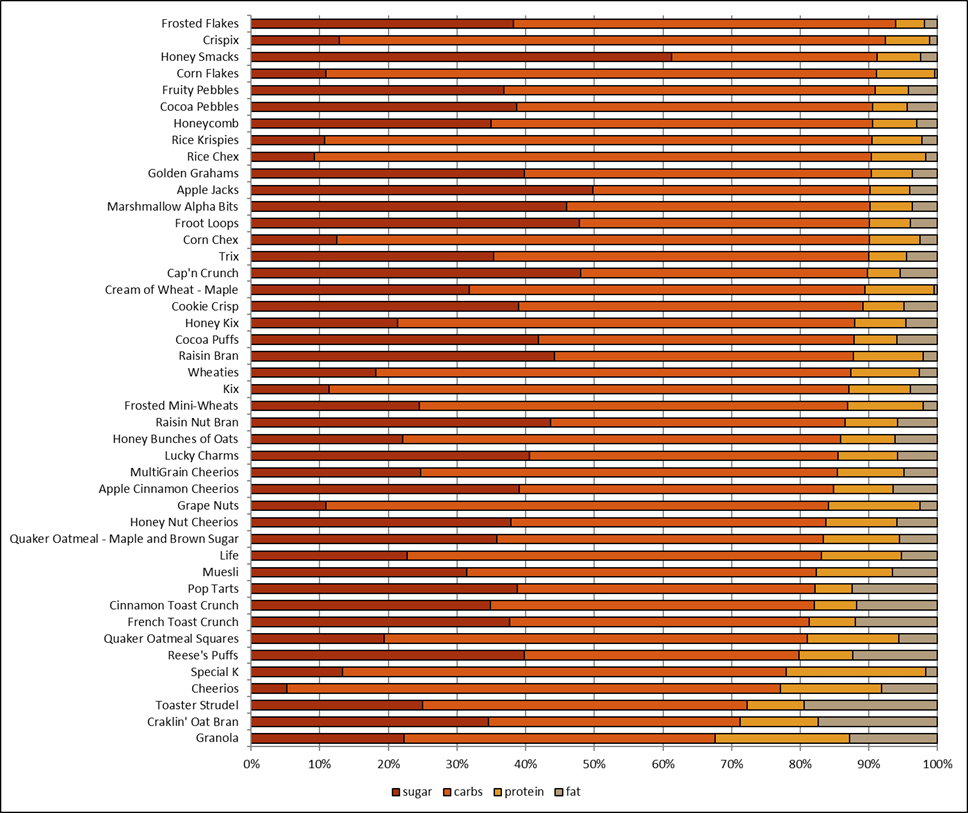 To my mind, this graph is at least as interesting as the first one.  Maybe that's because it helps me see plain Rice Krispies in a more accurate light.  Sure, they're low in sugar, but they're still high in carbohydrates.

Or maybe I like this graph because it brings Cracklin' Oat Bran down near the bottom of the chart, and I have a special place in my heart for that particular cereal.  I'm not a spokesperson for Crakin' Oat Bran (though I'm open to that possibility Kellogg's, if you're listening!), I just really like eating it.  Honestly, I don't think it needs a spokesperson.  Any cereal with a name like that, which is still on the market almost a half-century later has a peculiar type of staying power.  What's COB's secret?  It tastes amazing!  And malt, of course.  It has malt.