December 08, 2019
Apologies for going so long between posts.  I started a few, which I intend to publish soon, but I've been busy.  Last month, November, was National Novel Writing Month, and I'm glad to say I finished 50,000 words, though I didn't overshoot by as much as I did last year.  More on that in the offing...

Meanwhile, on the non-fiction front I've been busy putting together a book I intend to self-publish by the end of the month.  Why the deadline?  Well, it's a collection of heuristics and informed intuitions about how the body works from a biologist's perspective.  The theme is how to use a few simple ideas from biology to understand nutrition better.  Here's what Google Trends has to say about health-related searches over the past five years:

It looks like New Year's Eve is when the searches really start to pick up.  I've been sitting on some of these ideas - and some of the data I want to include in the book - for almost a year now and I really want to get it out at a time when it will be relevant.

Clearly the worst time to publish it would be any time between Thanksgiving and Christmas (at least in the US).  But if I can get it in by the end of the year I might be able to get in before the next health fad takes over and help a few people avoid some of the most egregious errors.

I'm thinking the next post will return to the topic of philosophy of science, since I have it mostly drafted, but I want to get the ideas right before I push it out.  I won't have time to work on it until after my book is finished, which at the latest will be the end of the year.  To hold you over until then, here's a sneak peek at some of the data from my upcoming book.  This is a partial graph comparing the macromolecular balance on a variety of popular candies.  The full list will be in the book.  If there's one you want to make sure gets into the comparison, leave a comment here before the end of the month. 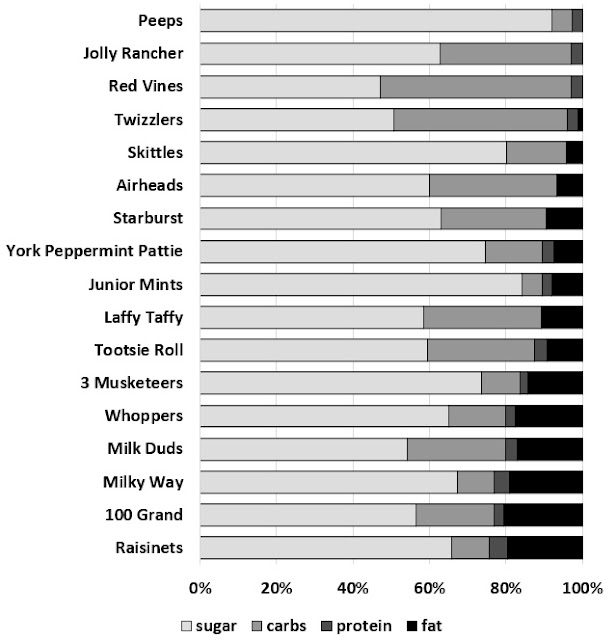