June 07, 2019
I've been working on the promised updates from the annual meeting of the American Society of Clinical Oncology. I've also been working, so the updates aren't coming out as I'd hoped. Part of what I've struggled with is figuring it what level of detail to share. On one hand, I want this to be accessible to the audience who reads this blog, which doesn't assume a strong biology background.  On the other hand, to talk about what's new and exciting I'm the field of cancer research I have to get into the weeds a bit. Especially if I want to communicate why it's important.

This will probably take a few posts, but I want to focus on some themes to keep from getting so caught up in the weeds we miss the broader picture of what we're doing - and how we're succeeding.

In a previous post I talked about how robust biological systems tend to be. The image I used was of an engineer who is trying to bridge a river. Instead of building one sturdy bridge across, an imaginary 'biology-oriented engineer' would build many bridges across, so if any one bridge failed you could still get across. These types of systems work well at guarding against systemic shocks, but they take time to knit together in a way that allows one system to take over if another one is damaged. This is the kind of precision you get after a million years of evolutionary pressure, but not after a couple decades of random mutations from smoking tobacco.  That's a distinction we can put to work for us in useful ways while fighting cancer.

Let me give an example that gets into the weeds of cancer research. DNA is constantly being 'damaged' by outside influences, just because of random reactions inside the cell. Remember that a cell is like a booming metropolis driven by chemical reactions instead of people. In this rich environment you get the wrong reaction sometimes just from pure chance. Perhaps the result will be a changed base pair in the DNA, or perhaps one strand gets nicked. There are lots of mechanisms to fix problems like single-strand breaks. After all DNA is double-stranded, so it's still held together by the other strand. If one side gets cut there's plenty of time to fix it while the other side holds firm. 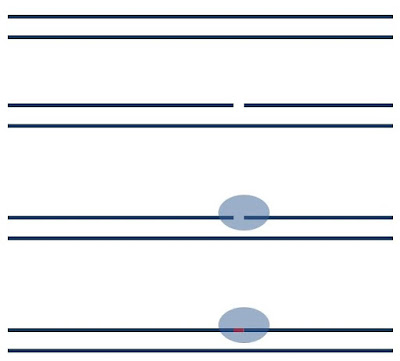 A cell has to copy its DNA before it divides so it can give a complete set of chromosomes to each new cell. Cells minimize how often they divide, but it still happens and DNA damage doesn't stop during cell division. Sometimes a cell starts copying a nicked section of DNA before the repair mechanism gets around to fixing it. This is a problem because by separating the strands those nicks become full breaks in the DNA. That has to be fixed quickly. Fortunately there's another mechanism that repairs double-stranded breaks. Mostly it works by just grabbing two blunt ends and gluing then together. It's not as accurate as the nick repair mechanism since the two strands aren't being held together.  It might stick two ends together that don't belong, or turn one upside-down.  (How's it supposed to know the code?)  But this type of break is so uncommon that most of the time the nearest break is going to be the right one to stick to. This is especially true in a cell whose nick repair is working well. 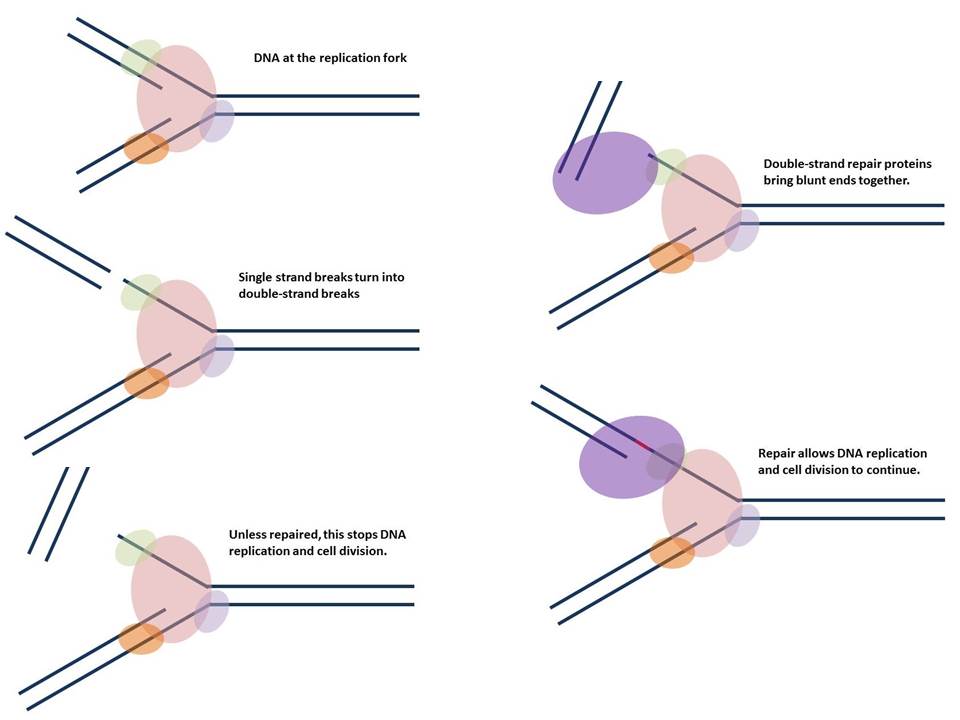 How does this help fight cancer?

There's a sort of decision tree that happens in all cells, and cancer cells can manipulate the decision tree to serve their purposes of independent growth, instead of cooperative growth.  First, let's look at a simplified version of this decision tree: 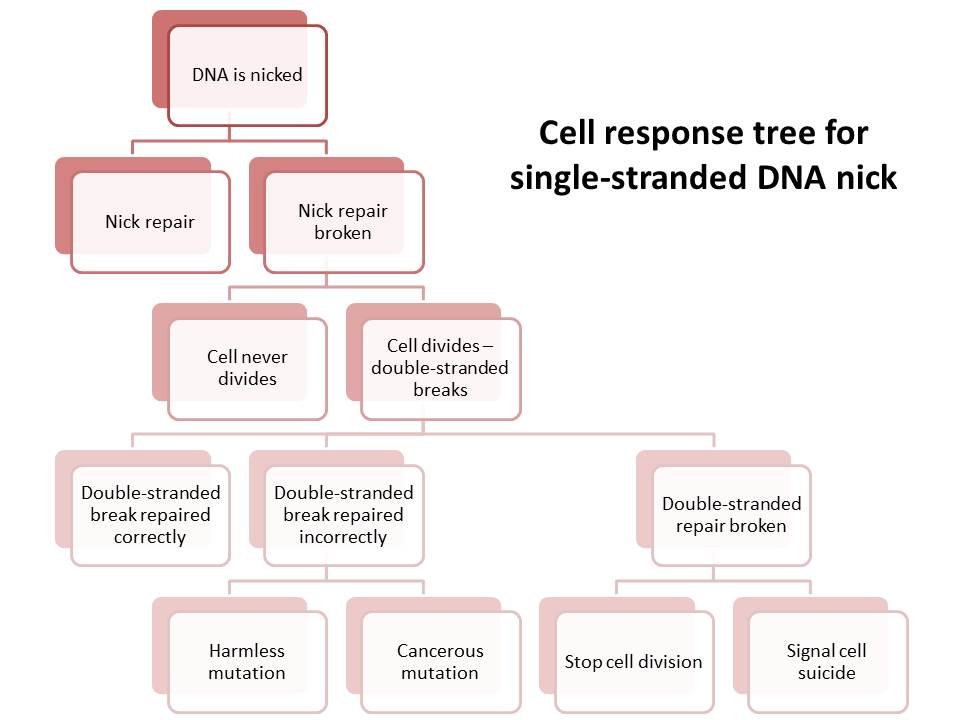 One of the reasons chemotherapy works in cancer is that it kills rapidly dividing cells.  If a cell divides too rapidly, DNA repair mechanisms don't have enough time to work properly and you get mutations.  Now, some cancers have mutations that inactivate the single-stranded nick repair mechanism.  That means they rely wholly on the double-stranded repair mechanism to work in order to allow them to keep dividing.  If those repairs aren't made, there are multiple mechanisms (and another whole blog post about how we can target them) that stop the cell from dividing and give it signals to kill itself.  Other cells rely on the nick repair, because their double-strand repair mechanism is broken.

These pathways each present a single point of failure for cancer researchers to target, and in years past we've done just that.  After failing chemo, patients with some kinds of cancer will go on things that target DDR mechanisms, like PARP inhibitors (which shut down nick repair).  There are dozens of potential targets along this pathway, with many of them being investigated individually or in combination.

One new thing researchers are doing is to use next-gen sequencing to figure out if a patient's cancer has mutations in DDR genes, and if so which ones.  We can then use this information to target treatment to other mechanisms that were working, thereby shutting down the cells and making them kill themselves. We can use the sequencing approach to figure out which drugs are more likely to work.  In cancer, this kind of advance warning is crucial for a number of reasons (more on that in another post).

If you know anything about how chemotherapy works, you might be asking yourself, "why is this better than chemo?"  Chemo drugs already kill rapidly-dividing cells.  One way they work is by looking just like any normal base ready to get added to a growing DNA strand being copied.  But after they're added the copying machinery can't add the next base onto them.  It's like if a builder peppered construction sites with 2x4s that are solid steel on one end.  You could fix them in place at the bottom, but then you wouldn't be able to attach any boards to the top, since your screwgun can't drive screws through steel..  You'd have to tear it out.  Except cells don't have the machinery to tear the chemo drugs out, so they just do what any cell that has trouble duplicating its DNA does: they kill themselves.

If that's so, what's the difference between targeting DNA damage repair (DDR) versus rapidly dividing cells?

Only the cancer cells have mutations causing their DDR pathways to stop working right.  (There are reasons this leads to more aggressive cancer, but I won't get into them here.)  The other cells in your body are mildly inconvenienced by the drug, but the cancer cells are devastated.  This is good, because you have a lot of cells that rapidly divide, and which actively fight cancer cells - such as immune system cells.  When you give something non-specific, like chemo, you might kill a bunch of cancer cells, but you'll also weaken the patient and their immune system.  Often patients' treatment options are limited because they have to wait for those immune system cells to grow back before hitting them with another round of chemo.  By targeting DDR mechanisms, you mostly hit cancer cells and leave most immune system cells alone.  That means patients can be on the drug longer - in case not all the cells in the cancer rapidly divide - and you can give higher doses.  There are still side effects, but they're not as common.

One interesting observation from ASCO this year was that the more rounds of chemo a patient gets the less effective the DDR targets, like PARP inhibitors, are.  Why?  Well, chemo hits cancers hard and leads to selection pressures.  A cancer that has survived multiple rounds of chemo is much more likely to have shut off many of the signals that tell cells to kill themselves if something goes wrong during replication.  Some patients do respond to DDR inhibitors, we saw that at ASCO, but many do not.  It may be that as these drugs get moved to first line therapies (first treatment patients get) they will be more effective while producing less toxicity.
Biology Cancer