May 02, 2019
One of my favorite roommates was an engineer.  We would often have interesting conversations where his engineering perspective and my biology perspective would clash in enlightening ways.  Sometimes it was little things, like when I was making dinner one night.  He questioned the wisdom of heating a small pot over a large burner.

He didn't like this explanation, since in his mind he prioritized the heat from the stove over my time.  After all, heating the house more in the summer through the use of the stove meant you'd get hit with a second wave of wasted efficiency when you had to cool the house down again.  To his engineering mind, it was too much waste and therefore largely irrational.  (Though I do think he understood and respected my view, he couldn't share it.)

This different perspective is a small demonstration of part of a larger difference between biology and engineering.  These differences become especially important wherever these two disciplines meet.  In my experience, we're culturally more attuned to the engineering perspective than the biological one, so we tend to apply engineering solutions instead of biological ones - even when we're focused on biology.

Engineering is highly focused on efficiency.  If I'm an engineer building a bridge, I'll consider different potential design structures and optimize for one that uses fewer materials while also providing the best support and stability.  If I find a new design that uses 50 fewer tons of concrete without sacrificing safety, I'll count that as a win and go whistling on my way.

Biological organisms organize themselves along different principles.  They're famously inefficient, often with multiple redundant systems doing the same job.  Here's a quick example of how inefficient they can be.  There is a class of signaling molecules called kinases.  They work by attaching a phosphate group to a protein, which usually turns that protein on.  This uses exactly one unit of energy (ATP or sometimes GTP).  Very efficient.

To turn the protein back off, another enzyme, called a phosphatase, comes along and removes the phosphate group.  This doesn't require energy.  Bonus!  That's extra efficient.  This basic mechanism is what you learn in your first cell biology class.  Unfortunately it's a lot more complex than that. 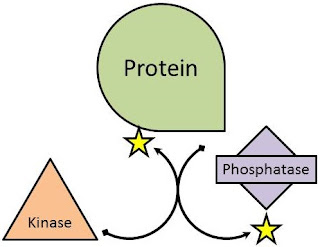 To simplify, think of it like a swarm of three different types of robots in a Furby factory.  One type works on a production line making Furbies.  Two more robots control the Furby-making robot; one turns it on and the other turns it off.  At any given time, most of these on/off robots are hard at work, turning the Furby-maker on, then off again in an endless cycle.  They use a lot of power, but nothing gets done really because the Furby-maker is never on long enough to get more than a Furby or two made.  Then the factory manager decides he needs Furbies, so he sends in another robot, which goes through shutting down the 'off-switch' robots.  Slowly the Furby-making robot is on more often than it's off, and it makes Furbies at a decent percent of its maximum capacity.  There are still 'off-switch' robots roaming around, but they don't shut the Furby-makers off for long before they get turned back on again.

Then the manager of the factory says they have enough Furbies, we've hit Peak Furby, so other robots are dispatched to switch off the 'on-switch' robots and switch on the 'off-switch' robots.  The whole production floor is a random dance of activity where a lot happens but most of the time nothing gets done.

I'm not going to claim no engineer would ever design this system, mostly because I don't know if we can count Rube Goldberg as an engineer.  Here's the mind-blowing part: this isn't the story of one process in the body.  This is the story of countless processes.  Whether it's parts of the cell 'skeleton' that continuously cycle through building/destroying or signaling molecules turning themselves on and off, everything seems to be running in place all the time.  Why is this a good idea?  Is Nature crazy?

No.  A big reason for all this inefficiency can be explained as intentional heat production.  Wherever you are while you read this, it's likely that the temperature is either somewhere around 72 F (room temp, about 25 C) or within a certain range of that.  If it's much higher, you'll be uncomfortable and if it's much lower you'll be cold.  But why is 72 F the range where you're comfortable?  Why not 98 F, closer to your core body temperature?  Because your body is adapted to survival in a colder environment than the peak efficiency temperature of its proteins.  You put off as much heat as a 60 W incandescent light bulb, so you need those inefficiencies to survive.

Still, it's an inefficient system.  An engineer might design a better protective covering to keep the heat in.  But biological organisms are more concerned with adaptation and survival - on a population level - than engineers.  They optimize for robust responsiveness to potential disaster more than the most careful engineer ever would, and they often do this at the expense of efficiency.

If a bridge were organically-organized, instead of mechanically engineered, it would probably look more like this: 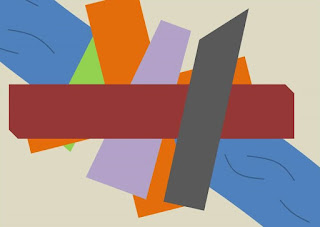 Multiple overlapping, redundant bridges doing the same job.  Except it would probably continue all the way up and down the river.  This is an incredibly inefficient way to build a bridge, but there's no chance that any earthquake will knock them all down.  Even after the worst disaster you'll still be able to cross to the other side.

The Impulse to Engineer Biology

There's a tendency to look at a biological system and ask how we can engineer it to make it more efficient.  They start out so inefficient, that it feels like there's lots of room to add efficiencies.  In one sense, there's nothing wrong with making a better widget or inventing a machine that washes the laundry for you so you don't have to do it.  In another sense, there's a lot of naval-gazing that goes on about what's the right way to raise a child, right kind of food to eat, right amount of water to drink, right amount of soccer lessons to allow cognitive/teamwork neural pathways, etc.  Every aspect of biology is treated like that engineered bridge that needs to be finely tuned or it will fall apart at any minute.

Biology isn't designed that way, though.  Brains are surprisingly malleable, you can go days without eating and still be fine, you don't need an exact number of micrograms of molybdenum every day, etc.  That's a good thing.  There are dumb things you can do to destroy your health if you do them every day, like smoking for example.  For some things there's a lot of evidence demonstrating they're bad.  Stay away from smoking, bullets, and unprotected sex.

But most of these fine-tuning arguments aren't about known or obvious dangers.  They're about slight changes that will make imperceptible improvements/problems for your health, mental well-being, and the like.  They don't take into account that biology is robust.  They assume that any small amount of some poisonous substance you're exposed to is horrible and will continue to plague you until your dying day.

That's not how biology works, though.  It's robust.  Of course something harmful is going to do damage, but on balance most harmful things will be swallowed up in the noise and churn of day-to-day maintenance that's always going on inside you.  Ongoing, low-level exposures can have lasting impacts.  But one-off events can be overcome.  Even though it's remarkably inefficient, the human mind and body is also incredibly flexible.  Yes, you can take this too far and assume a kind of mind-over-matter theory that breaks down when you try to apply it to your polio infection.

My point is different and more subtle than that.  Biology is inefficient because it's robust.  It's organized in such a way that shocks to the system will not destroy it.  Keep this principle in mind the next time someone tries to sell you on some must-have supplement or tell you that something is required for 'proper brain development' or whatever.  Engineers will create one sturdy bridge across the river.  Biological systems create dozens of paths to the other side, and if you miss this one you can find another.  The goal is to get to the other side, and your body doesn't much care which bridge you take to get there.
Engineering Misconceptions Science