July 12, 2020
I want to make a quick distinction between the concepts of homeostasis and equilibrium. It can be easy to think of these two ideas as being the same thing, because both are mechanisms that drive a system that is in a state of change toward a system that is no longer changing. But understanding why they're different can change some low-level lines in our rational operating system code. Bear with me for a second as we cover the basic ground you probably already know. There are subtleties in these definitions we'll pull out if you give me a moment. The payoff should not just be in understanding biological systems better, but also hopefully in understanding larger systems like families, communities, and society as a whole.

Let's start with equilibrium. This is the simple idea that things tend to become more uniform over time unless there's something preventing that from happening.

This sentence is an example of an initial state that has not reached equilibrium.
This sentence…
7 comments
Read more

Start with an Observation

June 22, 2020
My wife is a science teacher, and when we first started dating she was teaching high-school science to freshmen. On our first date, she described her difficulties teaching the scientific method to her students. By way of demonstration, she asked me, "What are the steps in the Scientific Method?"

I said, "Well, you start with an observation, then-"

I pointed out that this powerful idea isn't just difficult to understand for high-school science kids. It's also difficult for some researchers to unde…
1 comment
Read more

Will the lockdown hurt your immune system?

May 10, 2020
In my last post, I called out pro-shutdown hoaxers who think that misinformation is okay so long as it gets people to do what they want them to do. In this post, I'd like to call out misinformation circulating on the anti-shutdown side. In particular, I'm thinking of one video that has made a large splash, in which two physicians (I'm not in a position to verify whether they are what they claim) make a bunch of statements about immunology and microbiology, and then say how they think those ideas apply to the pandemic - specifically the lockdowns.

I won't link to it, since it's being taken down wherever it's posted anyway, but I do want to go over why the things they say sound true but ultimately are not. Let's boil down a few of their claims so we can refute them one by one. I'll highlight the claims in yellow in the paraphrased statements below, and put the true statements in orange:

May 01, 2020
I'm not convinced that the current efforts at combating the spread of COVID-19 are a wise course of action. I realize this statement is currently outside the Overton window for polite society. In the past I've advised people who are skeptical to at least try to make the experiment work. At this point I'm recommending that ...

...well, that you not look to random bloggers for advice on this kind of thing. However, if you're looking for a bit more understanding that's something I can supply. I know this is a contentious issue, so I'd like to start on what I think we can all consider to be common ground, given the state of the evidence to date.

Firstly, the defining nature of this crisis - and the beginning of any pandemic for that matter - is uncertainty. Back in early March, I noted this fact, and that some things we would likely discover over time and other things we might never know. Some of the things I noted back then turned out to be incorrect, as is expect…
4 comments
Read more 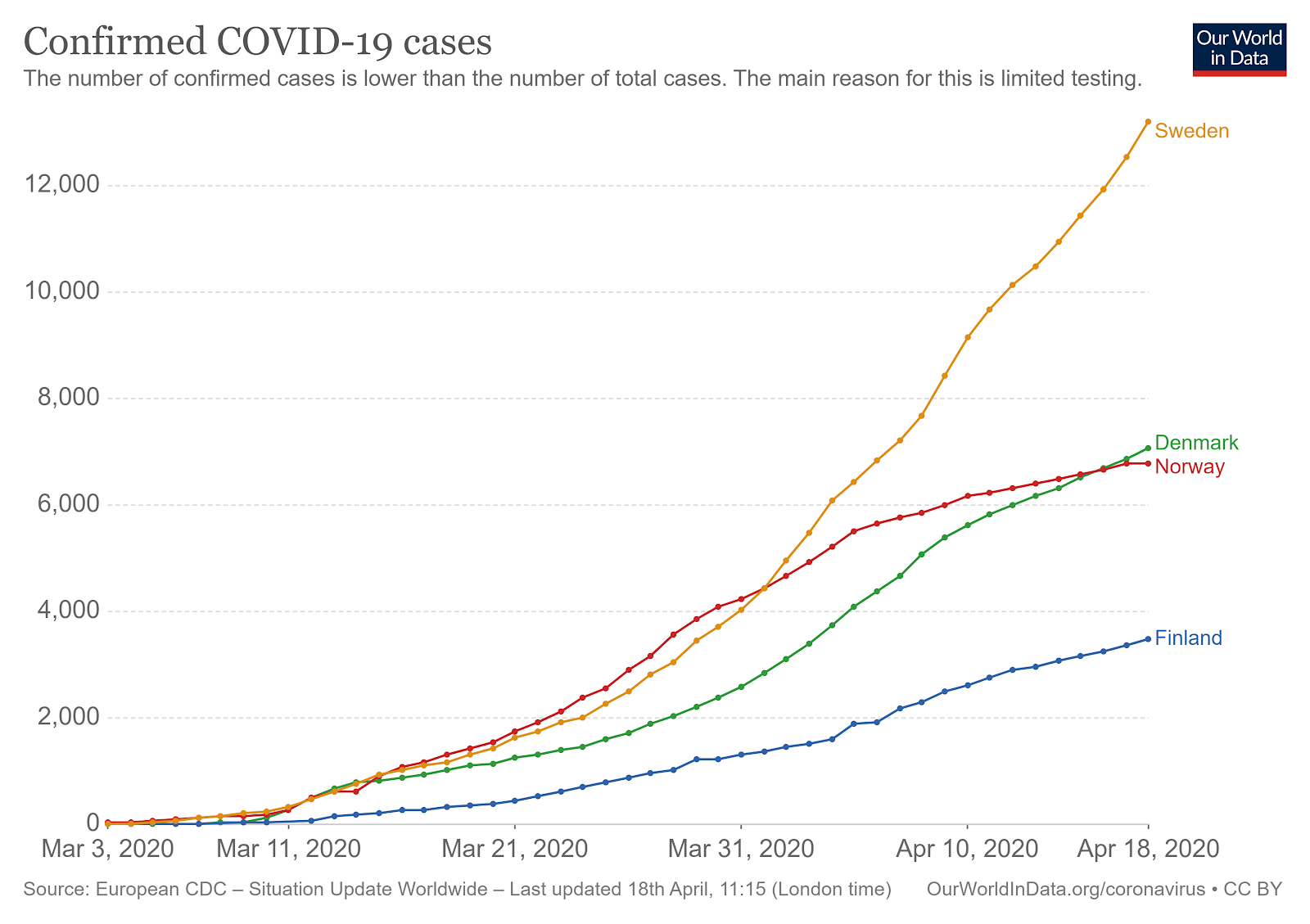 Note: This post is based on incomplete data sets, and will likely not age well.
How's that working out for you? A few nations took a different approach to the global pandemic, but then changed course to fall in line with what most of the rest of the developed world is doing with social distancing and shutdowns. Great Britain tried it for awhile before they capitulated, then Japan did the same. From a soulless data analysis perspective, this is unfortunate, because both have large population centers and make good comparators to other nations in Europe and Asia.

There are a few holdouts remaining, including one I'd like to take a look at today: Sweden. A few caveats before we dive into the charts (which you can find at this source). First, I'll be making comparisons among Nordic countries, but that doesn't mean those nations are interchangeable. There could be reasons for the differences we're seeing beyond just their chosen approaches to curtailing the spread of SAR…
2 comments
Read more

March 31, 2020
Once, back in grad school, I was talking to my thesis adviser about a particularly difficult experiment I was trying to figure out how to do. I was coming off an experiment run that took about two weeks from the start until I got the results back for analysis:

"It didn't work." I told her.
"What do you mean, 'It didn't work'?" She asked.
"Something about the way the experiment was run was wrong. I got no signal, not even for the standard curve and the controls. It didn't work."
"The only failed experiment is one you don't learn anything from." She chided me. "If you can't use this experience to figure out why it didn't work - or even to learn how you might figure that out with the next experiment - then you're just wasting time and money, hoping to learn something by random chance."

This is a powerful lesson, and one I want to expand on more generally. It's a lesson that should influence how we v…
2 comments
Read more

Are COVID-19 cases already on the decline?

Caveat: I am not an epidemiologist.  My fields are oncology, immunology, and to a lesser extent microbiology.  This whole situation is changing rapidly anyway, so uncertainty reigns during times like these.  I'm more interested in data analysis than I am in diagnosing conditions on the ground.

We should be careful - suspicious even - when we see data and think it's talking to us.  Especially in times like these, I often hear people say they're not doing anything fancy, they "just look at what the data say."  That's false.  Data don't say anything.  People say things about data.  Sometimes data can look very convincing, but then as you ask more questions and look at the data in a different way you can come away with different interpretations.  That's not what people mean when they say thy're just looking at what the data say.

By all means look at the data, but remember that if you're hearing something it's not because the data are talking t…
Post a Comment
Read more
More posts